‘You could be hung and executed’: Rabid anti-vaxxer who styles himself the ‘vaccine police’ livestreamed himself abusing Walmart pharmacists for administering shots

The Nuremberg Code was created to establish ethics in human experimentation. 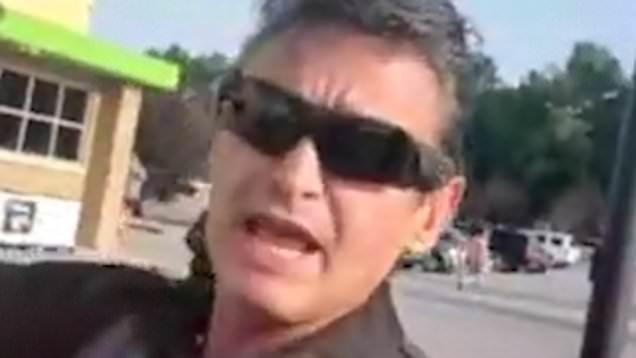 Key confidently leads his small crowd in his ‘vaccine police’ uniform to the pharmacy as he greets the employees through the store and thanks to them for their service. As he gets to the pharmacy section, he sees that they are drawing their shutters and beings to run and shout, ‘Oh they’re closing! Look at them close the door!’

Smiling and chuckling, he harasses the workers through the glass window, as one hangs a ‘No pharmacist on duty’ sign. Another employee comes from the shopping center and stands by as Key continues to rant about the pharmacy’s early closure, false data about the vaccine, and putting the employees on notice for possible execution.

As the female employee silently watches them he turns his attention from the cameras to the employee, directly threatening her. ‘You yourself could be executed. It’s a violation of the Nuremberg Code. I do this out of love, not fear and intimidation, but letting you guys know you will be held accountable.’

He then begins claiming that he came to get his vaccine, begging the employees to vaccinate him.

The female employee and a male employee who joined her, turn and walk away from Key and his group as they continue to follow them through the store loudly demanding a vaccine. When the employees do not react after 25 minutes, Key finally leads the group out of the store suggesting they go to another pharmacy. The group walks out together mockingly thanking the employees and naming them on camera.

As they exit the store, the male employee is standing outside with a police officer. Key continuously insists that he came to the pharmacy to get his vaccine and claims the employees are discriminating against him when they inform him that he has to make an appointment. He argues that is not the policy.

At points, Key threatens to file lawsuits against the employees for discrimination and the officer for trespassing after it is suggested that Key is trespassing. The officer claims that Key’s comments are just for show.

Key continues to demand his vaccine and declares that the female employee will be responsible for his death if he gets COVID because she refused him.

The officer calmly states, ‘At some point, we’re gonna have to just walk away. They don’t want you here.’ He is soon joined by three other officers, which Key’s group mocks before eventually walking away.

His Facebook shows that later that day, Key went to pharmacies at Walgreens and CVS. On Tuesday, he filmed himself ambushing Steve Edwards, the chief executive of the hospital system CoxHealth, in a parking lot for his ‘crimes against humanity.’ He also went to Liberty Pharmacy on Wednesday.

Key has gained popularity with anti-vaxxers using his Facebook page, which has 4,449 followers, and his website Keys2life.info. He posts several live streams a day perpetuating false claims about COVID and the vaccine.

According to his page, he was recently let go from his job ‘for standing up for all the people around the world’ and is collecting donations to raise $100,000 ‘to hold the nation’s accountable, defend the right of freedom, and protect the children around the world from mask mandates, forced vaccines, and child trafficking.’

In 2013, Sports Illustrated exposed Key and his partner Mitch Ross for peddling deer antler spray and ‘concussion caps’ – which were essentially beanies- to pro football leagues and other athletes as a remedy for injuries.

As he continues to ask for donations and spew misinformation about COVID, he touts health and exercise supplements and products.

Walmart and Key did not respond to DailyMail.com for a comment.

After the January 6 Capitol riots, social media companies including Facebook pledged to work to limit and reduce the spread of misinformation regarding the 2020 presidential election and the pandemic.

But in a recent interview with CBS This Morning host Gayle King, Facebook CEO Mark Zuckerberg dodged questions about COVID-19 misinformation on the platform.

In an interview clip shared on Wednesday, King repeatedly pressed Zuckerberg on how many people had viewed pandemic misinformation on Facebook.

‘One of the things that the White House has asked for repeatedly and still hasn’t gotten a number, is how many people have viewed and shared, do you have that number?’ asked King.

He continued, ‘Now do we catch everything? Of course there are mistakes that we make or areas where we need to improve, but that’s the best number that we have in terms of what we’ve seen and what our systems have been able to detect.’

King pressed him further, ‘Those are two separate issues. You’ve taken down 18 million pieces of misinformation, but how many people have viewed the misinformation?’

‘The White House has said at one point that Facebook is killing people. That was very bold and very blunt and provocative, and I think at one point the president walked that back,’ she added.

‘I understand what you’re saying,’ replied Zuckerberg. ‘The number that I have off the top of my head that I can share is the number of pieces of misinformation that we’ve taken action against.’

Zuckerberg also insisted that millions have used Facebook’s vaccine finder to locate appoints for shots, and that hundreds of millions had visited the site’s coronavirus hub to get authoritative misinformation.

In July, President Joe Biden publicly accused Facebook of ‘killing people’ with misinformation, though he later tempered the statement.

At the other end of the political spectrum, Republicans have grown increasingly enraged with the social media giant over what they see as too much censorship.

Facebook blocked former President Trump from the platform until 2023 and has limited the sharing of articles that could be unfavorable to President Biden.

Sources close to the Biden administration told the New York Times that the White House believes Facebook, which also owns Instagram and WhatsApp, was ‘particularly problematic,’ as executives point to steps taken to share factual information but avoid responsibility for falsehoods spread on the platform.

‘We’ve made clear to them when they haven’t lived up to our, or their own, standards and have actively elevated content on their platforms that misleads the American people,’ Mike Gwin, a White House spokesman, said.

Meanwhile Andy Stone, a spokesman for Facebook, said that the White House wasn’t giving the company enough credit for promoting the vaccine, and said Facebook had worked with the White House for ‘many months’ to get people vaccinated.

‘We remove COVID-related content that breaks our rules and continue to link to authoritative health information on all COVID-related posts,’ Stone said.

A large number of Facebook policies deal with clear misinformation – such as outlawing claims that jabs contain ‘the mark of the beast’, or turn you into a monkey.

But the site also says it bans ‘claims that COVID-19 vaccines kill or seriously harm people (such as causing blood clots.)’

That is despite the fact that medical regulators in Europe and elsewhere have seen fit to put warnings on AstraZeneca and Johnson & Johnson jabs saying they can cause blood clots – albeit in rare cases.

Facebook also faced controversy when it initially banned suggestions that the virus emerged from a Chinese lab – and then was forced to roll back that policy in March as it became increasingly clear that lab origin was a viable theory.

The Biden team has clashed repeatedly with social media companies over misinformation for years, and White House chief of staff Ron Klain has raised the issue in conversations with Facebook chief executive Mark Zuckerberg, according to an official. Biden himself has not spoken with the executive since taking office.

‘Misinformation poses an imminent and insidious threat to our nation´s health,’ Murthy said during remarks Thursday at the White House. ‘We must confront misinformation as a nation. Lives are depending on it.’

Murthy said technology companies and social media platforms must make meaningful changes to their products and software to reduce the spread of false information while increasing access to authoritative, fact-based sources.

Too often, he said, the platforms are built in ways that encourage the spread of misinformation. ‘We are asking them to step up,’ Murthy said. ‘We can´t wait longer for them to take aggressive action.’

Facebook on Friday responded to Biden´s attack, with spokesperson Kevin McAlister saying, ‘The facts show that Facebook is helping save lives. Period.’

The company also released a blog post saying its internal research showed it was not responsible for Biden’s missed vaccination goal.

‘The data shows that 85% of Facebook users in the US have been or want to be vaccinated against COVID-19,’ the company said. ‘President Biden’s goal was for 70% of Americans to be vaccinated by July 4. Facebook is not the reason this goal was missed.’

Clashes erupt as Holland goes BACK into lockdown: Police spray protesters with water cannon as shops…

What a difference two years makes! Slimmed down royal family attends Royal Albert Hall for this…

EXCLUSIVE: Ghislaine Maxwell speaks from behind bars for the first time in the Mail on Sunday:…

WORLD EXCLUSIVE: Ghislaine Maxwell tells all from inside her US prison cell: Heiress says ‘I am…

Graduates will have to start repaying student loans ‘once their salary hits £22,000’ under…

Pictured: ‘True hero’ bystander, 20, who died saving the life of a great-great-grandmother, 84,…

Married police chief superintendent, 38, is suspended over claims of ‘improper’ relationship with…

Deadly game of cat and mouse in the skies over Europe: British and US bombers are pictured on patrol…

Tears for a COP out: Climate conference president Alok Sharma chokes up and tells delegates he is…

Christmas is saved? Sainsbury’s, Waitrose and Marks & Spencer say there WILL be enough food and…